I chose to translate these two poems, as they share a motif of sunlight portrayed negatively. I usually associate sunlight with hope and joy, so seeing it used here to highlight the cruelty of man, or as this entity that should be blunted, as a curse to the world, was very striking.

I understood the line “what Man has made of men” to describe the evil humanity is capable of perpetrating. To emphasize this interpretation, as well as to highlight the slightly unusual choice of man in both singular and plural (mentsh and mentshn in Yiddish), I chose to capitalize Man.

In the line “For the image still wanders and my heart is not blind,” the Yiddish has the word homloz. The literal English translation of “homeless” evokes different emotions in English than the original Yiddish, so I used the word “wanders” instead, which seemed to better express my understanding that while one can physically cover the source of the horror, the dead bodies, the horror still stays within. The image of this horror is homeless, meaning it wanders inside such that the heart cannot avert its “eyes.”

For “Let the wind cry with blood for all of our kind,” the Yiddish uses the phrase far undz ale literally, “for us all.” Who is the “us”? Is it Jewish people? Is it humankind? I chose to use “for all of our kind,” believing this portion of the poem to be specially about Jews, since the phrase “barren roads of Poland” seems to reference the nearly three million Polish Jews killed. Such a severe decrease in the population would make roads, especially in previously predominantly Jewish areas, seem starkly barren.

The two poems are from the collection entitled Dortn (There, 1946), referring to pre-Holocaust Poland. I first read selections from Dortn on Tisha B’Av, the fast day in the Jewish calendar that commemorates the destruction of the ancient Jewish temples. In the last decades, it has become common for Jewish people to recount the tragedy of the Holocaust as a way to approach this 2,000-year-old tragedy. While reading these poems of horror, loss, and grief, I also found beauty. In flipping through the book, I opened to a spot where yellow flowers, stems still attached, had been pressed between the pages. I can never know who placed these flowers or when. Though the flower presser is most certainly gone, their flowers, the book itself, and the language are not.

Zusman Segalovitsh was born in Białystok, Poland in 1884. He wrote in both Russian and Yiddish and penned both poetry and prose. His books were well read in Poland. Segalovitsh had multiple close encounters with death during his life: a 1906 pogrom in Białystok, serving in the Russian army for a year, and fleeing the Holocaust between 1939 and 1941 before finally arriving in Tel Aviv. In his escape, he went through Lithuania, Russia, Bulgaria, Turkey, and Syria. During and after the war, he dedicated himself to memorializing Polish Jewry in his writings. Dortn was published in 1946, three years before his passing.

Betsy Morgan began learning Yiddish during her time at Drexel University (’18) studying Materials Science and Engineering. Ever since that first immersive Yiddish learning program at Yiddish Farm in New York in 2015, Betsy has been listening to, reading, and trying to speak more Yiddish. Originally from the Philadelphia area, Betsy now lives with her husband in Haifa, Israel. 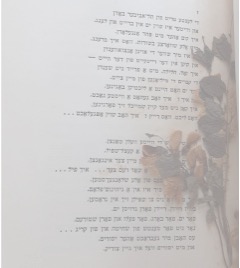